The United Cardinals Blogger project for August is to create a Cardinals theme night. Now there have been some strange theme nights lately (Grateful Dead Night?  Halfway to St. Patrick’s Day? Huh?), so we thought we would help the Cardinals’ promotional department with some suggestions for new theme nights.

My theme night suggestion is “Back to the ‘60’s Night.” Those of us who were alive then will remember that the 1960’s were tumultuous times. But there were lots of good things going on as well, both for the Cardinals (like 2 World Series championships) and for St. Louis.

Music:  Before the game and between innings, classic 1960’s songs should be played over the PA system.  Some of my suggestions are “Get Off of My Cloud” by the Rolling Stones, “Turn Turn Turn” by the Byrds, and “Like a Rolling Stone” by Bob Dylan.  There was plenty of good music during the ‘60’s, so the promotions department should be able to find other music to play.  If they get stuck, all they have to do is talk to John Ulett, the Cards’ PA announcer, since he worked at KSHE Real Rock Radio.

For the National Anthem, Jimi Hendrix’s version of the “The Star-Spangled Banner” could be played instead of the organ.  You can’t quite sing to it, but it fits the ‘60’s theme.

The players could wear ‘60’s throwback uniforms. These could also be sold in the team store, providing another revenue stream.  In lieu of throwback uniforms, the logo on the front of the uniform could be in red, white and blue tie-dye, like the uniforms with the camouflage logos.

Theme night promotional item:  A tie-dye T-shirt, of course! This shirt will have a Cardinals logo and Back to the ‘60’s Night printed in white on the front. Here is my design for the shirt (sorry for the crookedness of the designs – my gluing skills aren’t the best):

(Peace, love and baseball, for those who don’t know what that first symbol is.)

Between innings, slides could be prepared for each year of the ‘60’s, i.e., first inning, 1961; second inning, 1962, etc.  The slide at the top of the inning would be Cardinals history for that year.The background would be tie-dye or paisley. I would have made slides, but I couldn’t find a background I liked. For example, the slide before the sixth inning could read:

On May 12, the first game was held at Busch Memorial Stadium (Busch Stadium II)

The slide before the bottom half of the sixth inning could read:

The Beatles made their only St. Louis appearance at Busch Stadium on August 21, 1966.

(Insert photo of the Beatles at Busch Stadium)

Another interesting slide that could be shown before the game would be a list of ballpark items and what they cost in the 1960’s, such as ticket prices, scorecard prices, beer prices, and food prices.

As for the Kiss Cam and Nae Nae fan participation, the technology at Busch Stadium wasn’t there for that in the 60’s, so they would be not be held on Back to the ‘60’s Night. I’m sure some fans would approve.  The Clarkson Eye Care game could be guess the 1960’s player.

Back to the ’60’s Night would be a groovy night of peace, love and baseball.  (But no mind altering drugs allowed, just alcohol.) Far out!

My son and I attended the 2015 Cardinals Hall of Fame induction ceremony yesterday.  The ceremony took place inside Fox Sports Midwest Live! at Ballpark Village.  Since the doors opened at 11 AM, I told my son that we needed to get there when the doors opened to get a good place to sit.  He didn’t think I knew what I was talking about until we got there and we had to share a table because the place was packed.  Mom does know best, doesn’t she?  A shout out to my new friends Bill (who came all the way from Iowa), Calvin and Chad – thanks for sharing the table with us and thanks for the great conversation! Whenever you meet fellow Cardinals fans, it’s like meeting new family members for the first time. You always have something to talk about!

I ran into Lindsey Weber of the Cardinals communications department.  I know her from the blogger events.  I told her that someone from the United Cardinals Bloggers had to represent at this important event.  She was busy putting out fires, but she came back later and we spoke at length. I told her that I just had to be there because I had plugged Ted Simmons on my blog for the fans to vote into the Hall.

Before the ceremony, Frank Cusumano of KSDK interviewed Jon Hamm of TV’s Mad Men, who grew up with Ted Simmons’s son.

Dan McLaughlin of Fox Sports Midwest was the master of ceremonies. The ceremony started with the late Stan Musial playing “Take Me Out to the Ballgame” on the video screen. 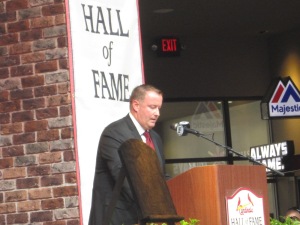 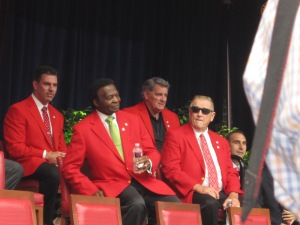 The only Hall of Famer not present was Tony LaRussa, who was in Japan for a previously scheduled engagement that he could not get out of.  Dan read a statement from Tony sending his regrets.

Then this year’s inductees walked on to the stage and were introduced.  Here are some photos: 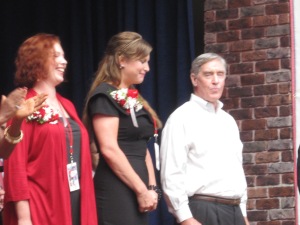 Dan then introduced Bill DeWitt, Jr., Bill DeWitt, III and John Mozeliak of the front office.  The DeWitts spoke about the Hall of Fame and the Museum. 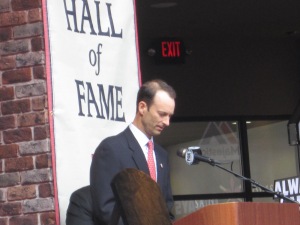 Before every candidate’s induction, there was a video clip of the candidate.  Mr. DeWitt, Jr. then read the inscription on that person’s plaque, and the candidate’s representative(s) or Ted Simmons was introduced.

The first inductee was George Kissell, the long-time minor league instructor who influenced Cardinals players for generations.  George passed away in 2008 due to an automobile accident, so his son, Dr. Richard Kissell, accepted the honor on his behalf.  Dr. Kissell spoke about George’s influence on the Cardinals he worked with.  He mentioned that George was a devout Catholic that went to Mass every morning, and that he knew where the closest Catholic church was to every ballpark.

Cardinals broadcaster Mike Shannon then came to the microphone to speak about George.  Mike was so emotional when he started speaking that he had to stop for a moment to regain his composure.  After he recovered, Mike regaled the crowd with stories about George.

The next inductee was Curt Flood.  Curt passed away from cancer in 1997.  His representatives were his wife Judy Pace Flood and his daughter Shelly Flood.The inscription on Curt’s plaque described his challenge to the reserve clause  Shelly spoke first.  I found it interesting that she read her speech from her cell phone.

Curt’s widow Judy Flood spoke next.  She was very articulate and well-spoken. I discovered when I read the Wikipedia page on Curt Flood that Judy was an actress. No wonder she was a great speaker!  She entertained the crowd and thanked the fans.  She said that now Curt had been welcomed back to St. Louis.

Lou Brock then came to the podium to speak about his memories of Curt.  Lou mentioned that when other fielders tried to catch a ball like Curt, they would break their wrists.  Lou shared other stories about Curt.

The next inductee was Bob Forsch.  Bob passed away in November 2011 from an aneurysm, a week after throwing out the first pitch at game 7 of the 2011 World Series.  Bob was represented by his daughters Kristen and Amy.   Amy was the speaker.  She spoke about how Bob loved playing in St. Louis and how pleased he would be that the fans voted him into the Hall, since he loved the fans so much. 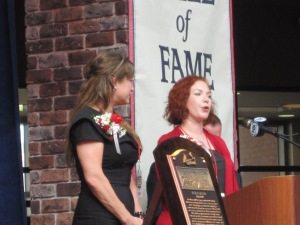 Then Bruce Sutter stepped up to the microphone and told great stories of rooming with Bob, and other stories. 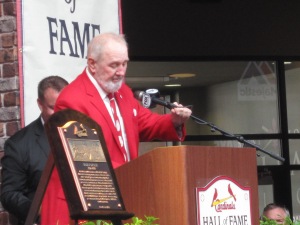 Then last, but not least, it was Ted Simmons’s turn to be inducted.  The video clip started playing and the tears started streaming down my face.  I remember watching Ted play in the 1970’s when I first became a Cardinals fan.  He was my favorite player.  I remember watching him run the bases with his long black hair blowing in the wind.  (Long hair was cool back then, you know.)  It was like reliving my childhood and I wished my dad had been there, but he passed away in 1980.

The audience gave Ted a standing ovation as he made his way to the podium. Ted saluted the crowd. 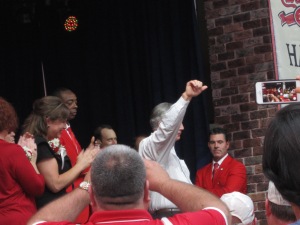 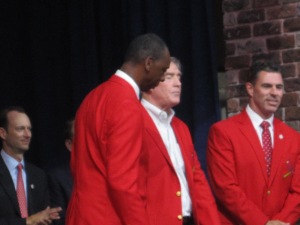 Then Ted got up to the podium and spoke for about a half hour.  He thanked the coaches and managers that helped him along the way.  He spoke about his time in St. Louis and thanked all the fans for their support.  He mentioned that he had toured the Hall of Fame Museum and it was a great walk along memory lane.

After Ted’s speech, Dan McLaughlin came back up to the podium to close out the ceremony.  All the Hall of Famers left the stage and the ceremony was over.

I was so thankful to be able to attend the induction ceremony.  I had a great time (thanks for buying us lunch, Phillip!).  I look forward to seeing who will be inducted next year.  If you get the opportunity to attend the induction ceremony next year, you should really attend. This ceremony was magical. The Cardinals have such a rich history and they honor the history the right way, with the Hall of Fame Museum, the Hall of Fame inductees and the various theme nights remembering World Series wins.

You can watch the induction ceremony on Fox Sports Midwest at 5 PM CST on Monday, August 17, so set up your DVR’s to watch the ceremony at your convenience.

Thanks as always reading!  See you next time!

It is always a pleasure to hear you speak at the annual United Cardinals Bloggers event at Busch Stadium every year.  You are straightforward and very informative, and you patiently answer everyone’s questions.  You and Mr. Mozeliak treat us bloggers with great respect, for which we are greatly appreciative.

I am writing today in regard to Jason Heyward, the Cardinals’ current right fielder.  As you know, Mr. Heyward will be a free agent at the end of the 2015 season.  I and other Cardinals fans enjoy watching Mr. Heyward in right field. Mr. Heyward has a cannon for an arm and is very good at throwing out runners at home plate.  He presently has the best batting average on the team. He has the most stolen bases on the team.  He appears to get along well with his teammates.  From what I can see, he is well behaved off the field and he appears to have acclimated to the Cardinal way of comporting himself.

In closing, I would request that you please sign Mr. Heyward to a long term contract at yours and his earliest convenience.  Thank you for your attention to this matter.  I look forward to the news of Mr. Heyward’s signing soon.

http://reflectionsruminationsrecollections.blogspot.com/
Follow Women Who Love Cardinals Baseball on WordPress.com
Back to top